A Young Lady's Adjustment to the Near South Omaha

“Look!  That house looks like our house!”  As my husband and I were driving home on Sunday, I was ecstatic to notice a house that was constructed similarly to ours.  I thought our neighborhood in the old Ostronic Heights was one of a kind, but I was proven wrong.  I have only lived in the area for about three months, but I am ashamed to say that the only parts of our neighborhood that I have really seen are between our house and Bag N Save.
I was raised on a farm about an hour from Omaha and went to a grade school where I could count the number of kids in my class on one hand (with a few fingers left over).  Moving to West Omaha last year was a big step for me: I moved to the “big city,” but I still had that safety blanket of being in a safe neighborhood and closer to home.  I had about 7 grocery stores in a 2 mile radius and was minutes from the mall.  I had 4 different family members that lived within 10 minutes that I could easily call on if I need anything.
When I got engaged in February, it was evident that I would be moving to Near-South Omaha.  He moved to the neighborhood because of his passion for diversity and he saw all the great advances that were approaching the area.  My husband would be the first to tell you that I wasn’t too pleased with the decision.  I was accustomed to the familiarity of my neighborhood and to be honest, I was under the impression near south Omaha wasn’t the safest area.
I learned that you aren’t completely safe anywhere when there was an armed robbery just across the street from my apartment.  I had been to my boyfriend (now husband’s) house countless times in a year and always felt safe.
After living in our house for nearly four months, I can honestly say I wouldn’t want to live anywhere else.  I love how many of the restaurants and businesses in the area are not franchises and you see the owners working all the time.  They put their heart and soul into the businesses.  I love the history of the buildings.  My husband has a book about Vinton Street and it’s amazing to see how many theaters and dance halls used to stretch along the street.  We are only the second owners to our house and it was built over 70 years ago.
My goal is to take a more complete tour of our neighborhood in the next month.  I am anxious to meet neighbors and walk to El Aguila’s in the summer.  If you see a group of moped riders, it’s probably me, my husband and our friends.  We hope you wave and we get to meet you!
Katie Duran: Deer Park Secratery / Newsletter Editor
Posted by The Deer Park Neighborhood at 8:30 PM 2 comments

Greetings everyone. I wanted to inform you that one of our neighbors, local photographer Larry Ferguson, will be hosting a community meeting at his studio on Vinton Street this coming Wednesday. The agenda of this meeting is to share opinions and thoughts on the future of our beloved historic Vinton Street. The Deer Park Neighborhood Association has put a lot of effort and funds into the beautification of this area, and we are pleased to see community meetings being hosted to talk about the future and aspirations of Vinton Street. The Omaha Chamber of Commerce organized this event and plans to have one to two more meetings in the proceeding months. If you are a resident of our neighborhood,

PLEASE, come to this meeting and share your vision as we discuss this part of our neighborhood's future. 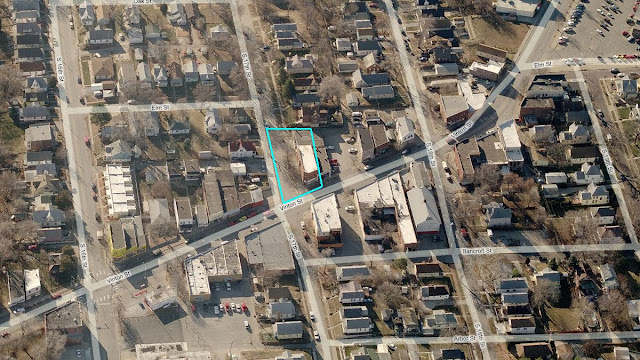 When: Wednesday, Jan. 19, 6 – 7:30 p.m. Stop by anytime, whenever is convenient for you!
Where: Ferguson Studio – 1701 Vinton Street (The building in the blue box above)
FOOD & REFRESHMENTS PROVIDED!
If you have any questions or wish to receive more information about this meeting, contact the Omaha Chamber representative, Karen Mavropoulos, at karen@projectsouthomaha.org or (402) 978-7929.
See you there!
Posted by The Deer Park Neighborhood at 6:35 AM 1 comments

An Introduction to Social Exclusion

The concept of social exclusion is used in different ways, but in most cases is often viewed as synonymous with poverty, inadequate social participation, lack of social integration, and or lack of power. Canadian Sociologist Dr. Daniel Béland of the School of Public Policy at the University of Saskatchewan, briefly outlines the history of this concept in his work, The Social Exclusion Discourse: Ideas and Policy Change. Béland's work reveals that two principle writings by Jean Klanfer and René Lenoir, offer insight into understanding the formulating concepts of social exclusion. Klanfer’s 1965 book, L’Exclusion sociale: Étude de la marginalité dans les sociétés occidentales [Social exclusion: The study of marginality in western societies], emphasized personal responsibility. Béland cites that in this writing, the term ‘social exclusion’ refers to people who cannot enjoy the positive consequences of economic progress due to irresponsible behavior (Klanfer, 1965). Acknowledging the existence of social exclusion as a denial in opportunities for economic progress, René Lenoir sought variables aside from, self induced “irresponsible behavior”. In Lenoir’s, Les exclus: Un français sur dix [The excluded: One Frenchman out of ten], excluded peoples, les exclus, were those citizens separated from mainstream society because of factors like disability, mental illness and poverty (Lenoir, 1974).
Béland elaborates that, although Lenoir’s social exclusion is where our modern use of the term emerged, the prevalence of modern social problems like long-term unemployment combined with growing concerns about racism and discrimination, have altered the meaning of social exclusion. The imperative notion to gain, arising out of the evolution of the term’s definition, is that social exclusion’s existence is rarely debated. Proceeding Klanfer and Lenoir’s works, researchers and civic advocates across the globe have spent the last three decades engaged in debates on the social implications of social exclusion. Béland states that the modern social exclusion paradigm revolves around how a lack of social integration, relates to limited access to labor market opportunities. Some state that an individual’s segregation, or social exclusion, from community and civic opportunities has no weight on their ability to maintain long-term employment. Others state that, not addressing policies to combat racism and social exclusion leads to increased long-term unemployment in addition to crime. Regardless of the position, several things can be concluded of social exclusion discussions.
Sir Tony Atkinson an academic based at Oxford University, argued in a 1998 article, that in discussions of social exclusion, three main themes recur:
v  Relativity - Social exclusion is relative to the norms and expectations of society at a particular point in time;
v  Agency - Social exclusion is caused by an act of some individual, group, or institution. A person may exclude themselves by choice or they may be excluded by the decisions of other people, organizations or institutions;
v  Dynamics - People are excluded not just because of current circumstances (e.g., unemployment /underemployment), but because they have little prospects for the future. “Social exclusion may apply across generations.”
In his article, Social Exclusion, Unemployment, and Poverty, Atkinson makes several conclusions in regards to social exclusion; (1) Since Social exclusion is not just a matter for one government department, the setting up of the inter-departmental Social Exclusion Unit is essential, (2) government policy can make a difference, and (3) economic analysis, for all its limitations, does have a useful role to play in illuminating the different elements of social exclusion.
As has been previously noted, one purpose of this blog is to link concepts and theory to modern practice and application. Upon reviewing introductory readings and research on social exclusion, I have begun to ponder how to apply this to our third sector (non profit)’s mission and strategies. Rather than engage in the paradigm debate of social exclusion implications, I seek to incorporate/address the preceding concepts in our organizations growth strategies.
In consideration of Sir Atkinson’s conclusions, I see it imperative that we address such concerns on a civic organization level. In spirit of linking concepts to practice, I move that our organization establish something in essence of a Social Exclusion Unit, strategize a policy to mend social exclusion, and promote analysis to understand the different elements of our areas' elements of social exclusion.  I would like to publically thank Sir Atkinson and Dr.Béland for their recent work in this field, and highly encourgae the reading of their works through the links provided in this post.
Oscar Duran: President
Posted by The Deer Park Neighborhood at 12:00 PM 1 comments

Greetings all and I welcome you to our Think Tank. The purpose of this project is to offer researchers, scholars, public officials, residents, and community advocates, opportunities to examine theories and strategies our organization uses to spur positive change and growth in our neighborhood.
I debated launching a dedicated blog to host this information, but wished to provide readers a connecting path between theory and application.  Blog posts tagged “Think Tank” will offer readers insight into civic concepts and theories that have inspired us most. Blog posts tagged “An Exciting Future” will update readers on our current community projects.  For those of you unfamiliar with the blog layouts, you may look to column on the left and select the posts groups by their according tags. In other words, if you click the Tag group, “Think Tank”, only posts with this tag will come up on the blog page.
Managed by volunteers, The Deer Park Neighborhood Association uses grass roots tactics to improve and strengthen our community. Please, I encourage your input and comments on all posts. I aspire for a network of community advocates to engage one another on this blog. With your comments and input, I am certain we can continue to improve our neighborhood and the field of community development.
Oscar Duran: Secretary
Posted by The Deer Park Neighborhood at 6:15 AM 1 comments

Omaha tops the list of America's Lowest-risk Housing Markets: Deer Park is an Exemplar of Stability 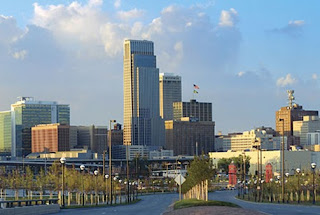 What better way to start 2011 than with a post that shows why Omaha is one of the best cities to live in? According to a recent article on MSN, Omaha housing prices have increased nearly every year since 2000. Omaha topped the list of America's Lowest-risk Housing Markets, with a risk of price decline at 3.1%, preceding number two, Pittsburgh, with a risk of price decline at 12%. To read the MSN article, please click here. 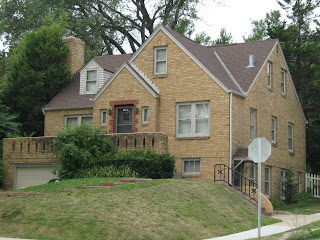 I need to add that the Deer Park neighborhood is no exception to the Omaha home value stability market. Using an online home search engine provided by CBS Homes, I found homes in our neighborhood ranging from $12,000 - $129,000. With the median home value around $60,500, Omaha's Deer Park neighborhood stands as one of the nation's most affordable places to buy a home, with little to no projected depreciation. Apparently, Omaha's average home appreciation has fallen -1.3%, and the average national home appreciation has fallen -5.2%. Where did Deer Park rank in this? In our neighborhood, home appreciation managed to go up .1%. Deer Park does have an aging housing stock, but at median price around $60,000,  our neighborhood, less than a fifteen minute walk to the Downtown Old Market, is a great place to buy a starter home. Trust me, I practice what  I preach: if you are looking for a home, you need to consider buying in this neighborhood. When I first learned of these astonishing low home prices in such a stable market and safe neighborhood, I jumped at the opportunity to buy a home here in 2009. Above is photo of my home. The stats: 2700 square ft., five bedrooms, 2.5 baths, and a mortgage less than a two bedroom apartment.

Thanks for reading, and please come back to this blog to learn more about our neighborhood. Happy New Year!