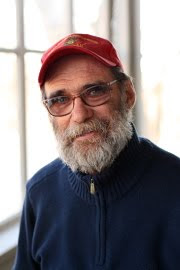 To say Terry Strauss is a South Omaha artist is like saying a Sandhill Crane is a Nebraska bird. Yes, they may settle here for a brief period, but have spent most of their lives wandering the planet. Strauss, now in his mid 60’s, has lived and traveled much of Asia and the United states, but has decided to reside in the Deer Park neighborhood for the past 2 years.

Strauss was a US marine, serving in Vietnam in the 1970’s. He likes to add he was a pacifist, which made it difficult for him to serve in the military. He started painting in 1987, and has had 41 art shows all over the country. He calls his style expressionism, adding he likes to use color as a means to creating feelings. When you look at Strauss’ work, you see distorted faces, and a bizarre perspective, but the thing that strikes the eye the most, is the vivid color. 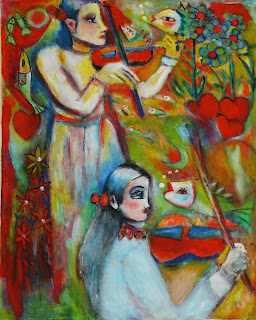 “I tell people I’m a painter, but in reality I’m a colorist.” says Strauss. “I’m not that good at drawing, but I do know color really well. I study what other artists did, especially 19th century painters. I want to know how they made it jump out at you, so that’s what I like to do.”

The overwhelming feeling of Strauss’ work is warm and pleasant. Perhaps that is due to the gentle nature of Strauss. Strauss, who had a stroke in 1983, lost most of his vision in his right eye. He says it affects the way he paints. He can’t see the entire canvas and paints smaller works now.

Strauss enjoys walking the neighborhood and is very approachable. He says he enjoys Deer Park, adding it’s the best part of Omaha because neighbors really help each other out. Strauss says he would like to open his house up to the public part of the week as a free gallery. He feels the paintings need to be seen. 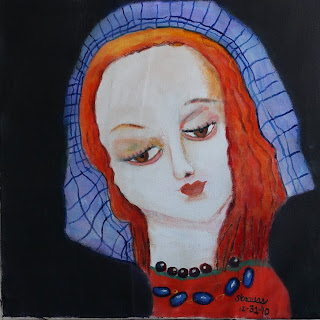 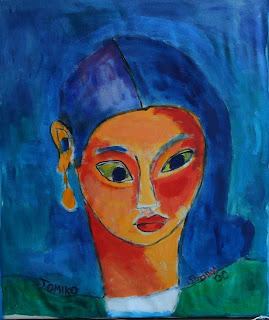 The Sound of Music at Grace University

Don't miss out Grace University's performance of The Sound of Music January 26-28 at 7 p.m. in the Suckau Chapel for $5 a seat. 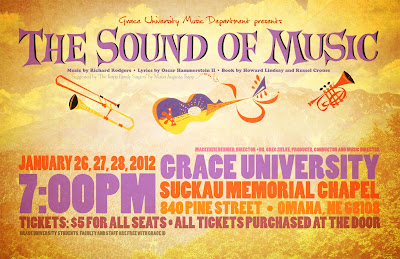 My oh my, the great news for Deer Park just keeps coming.

I actually received this news last month, but I wanted to save its announcement until the beginning of the new year. Last month, the Deer Park Neighborhood Association (DPNA) received two separate grants to aide us in hosting DPNA's first street festival, Universally Human.

The grant from the Omaha Optimists Club was for $200 to go towards the Urban Art competition to be held during the festival and the South Omaha Historical/Crime Prevention Grant was for $9,900 to be used for the festival costs.

Some may be asking, why name a festival Universally Human. This festival is not an typical festival. The named was selected to represent the internal need to be a part of a community and share one's passions and gifts with the world. As one member of our planning group so eloquently put it, these feelings are Universally Human. On May 12, 2012, The Deer Park Neighborhood Association and Habitat for Humanity of Omaha will host this festival to outreach to youth of Omaha.

Hey Neighbors,
The great news for Deer Park just keeps coming in.
If you have not heard, efforts to revive our Historic Vinton Street Corridor have really picked up momentum this year. From the establishment of the Deer Park merchants committee to the ongoing beautification projects spurred by the Deer Park Neighborhood Association, neighborhood leaders, residents and business owners alike, are workings together to continue to improve our neighborhood.
Well, word is spreading fast that Deer Park is a great places to live, work and play and another great business has decided to make Deer Park their home.
Deer Park is proud to announce that Emerging Terrain is our newest business neighbor. Emerging Terrain's new home, 1717 Vinton St., was built in 1913 and was most recently home to Mario Carpet Service.  Two week, just before Christmas, The Omaha World Herald broke this story in their article, Reinvigorating Vinton Street.  Well last Saturday, the local radio broadcast program,  GROW, interviewed ANNE TRUMBLE, founder and Executive Director of Emerging Terrain. It was a great interview that mentioned the dynamics and beauty of our neighborhood. Of course all we proud Deer Park residents have known this to be a great neighborhood for some time, but it is always wonderful to hear of others starting to see what we see. Listen to this great broadcast at the KFAB site here.

Thank You KFAB for constantly finding great local stories, and especially thanks you  to Emerging Terrain for joining our community, welcome to the neighborhood!!!
Happy New Year Deer Park, 2012 is going to be a stellar year.
Posted by Green Roots at 11:45 AM 1 comments